Martin Sever was the designer of the first mass-produced van in Slovenia and also responsible for the the first IMV caravans, produced in Novo mesto. In addition to other familiar products, Martin Sever was interested in many fascinating topics from the field of engineering which are presented in the exhibition.

The author of the exhibition, texts and video projections is Srečko Gombač from Izola, who is a son in law of the sadly already late Martin Sever. In the Sever family, some archival materials and personal items have been preserved, and this is also presented at the exhibition. The exhibition was set in cooperation with the curator of the museum’s traffic department, Mr. Boris Brovinsky.

The exhibition not only deals with Sever’s activity in IMV and its contribution to the development of a combined vehicle and trailers, but also with his performance in other areas.

In the introduction, the childhood and school years of Martin Sever are presented, his interest in technique, cars and airplanes, studies at the Faculty of Mechanical Engineering and the first job at the Automobile Factory of Maribor. We will present the participation in the IMV and the construction of a combined vehicle, caravans and, in part, off-road vehicles, motorhomes and the first attempts to develop mobile homes.
This will be followed by a presentation of the Sever’s activities in the study of the history of metrology in Slovenia, the idea of ​​modular prefabricated construction of wooden houses, cooperation in the revitalization of navigation along the Ljubljanica river and the construction of the tourist vessel Julija in the 1980’s. After retirement, Martin Sever devoted part of his time to the ideas of reviving and demonstrating the training of gliding flights according to the old technique (with a tow rope), and together with ing. Igor Vitaly made an airplane Vrabec. In the 1990’s, he developed a small fruit drying dish for home use, for which he received the recognition of the most ecological product of the year from the Economic Newsletter and the Slovenian Innovators Association in 1995 at the Celje Fair.

The occasional exhibition is set up in a small area of ​​the gallery above the former cloister in Bistra. Due to the limited space and location, vehicles are not represented in natural size (these can be seen in Novo mesto), but three models, fruit drying pan, plans, archives, photographs and personal items by Martin Sever are. 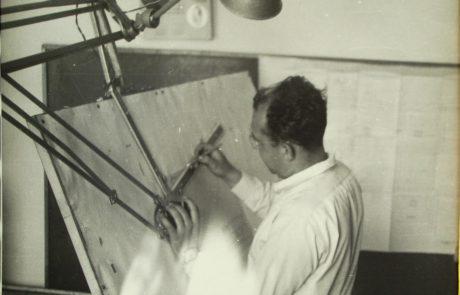