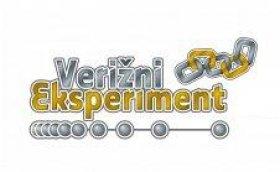 The Chain Experiment at Kolpern

The project started in 2004 and became one of the most noticed activities in Slovenia marking the World Year of Physics, 2005. The chain consisted of 53 experimental devices and was about 80 meters long. People from all walks of life participated: kindergarten children, primary- and high-school teams and students had their devices in the chain.

The Chain Experiment consists of mechanical experiments, which are put into motion in a sequence – resembling the well known toppling rows of dominoes. The devices are made by groups of constructors, ranging from the kindergarten through primary schools, secondary schools, The Faculty of Education (University of Ljubljana) and individual groups of youngsters. One example of an experiment made by a high school it is published on You Tube
(http://www.youtube.com/watch?v=vDyY2V4wag0).

There are two basic concepts that are followed in constructing an experimental device – it must be based upon an interesting physical phenomena and it has to be self-operational within the chain. The links must all start and end in the same way so that they can be joined in arbitrary order. Only the first link is started by hand, and then the previous one must trigger the next, and so on. On the day of public presentation the organizers join all the devices together to produce one long chain.

Each school year, a demo chain of ten such devices (Demo-CE) is shown in schools, museums, malls or fairs in order to promote the activity. The Demo-CE has been travelling since 2004 and it has received a positive feedback from teachers and students. There are around 15 presentations of Demo-CE throughout the year and the whole activity reaches around 10,000 people each year. The final Chain Experiment is shown yearly at The Technical Museum of Slovenia in Bistra near Vrhnika, where a big chain of contraptions made by all the teams is displayed. The organizers and the visitors chose their prizewinners for that year.

Teams from abroad are also invited to join the chain. The Chain Experiment was presented at the GIREP-EPEC Conference held in Opatija (Croatia) in 2007 and is a member of EuroPhysicsFun (www.europhysicsfun.org).

The public impact is evident from the history of Chains successfully presented in the final event each year and from the growing number of constructors and visitors. Schools have incorporated the possibility of their pupils participating as one of their regular supplementary activities.

The activities contained in The Chain Experiment link physics to the surrounding world, and show that physics is not so difficult to understand and to pinpoint its usefulness in everyday life. Constructors make their experimental devices using their own creativity and skills, but the most challenging aspect is to insert a physical phenomenon, which is graphically describable and at the same time vivid and impressive.